As I mentioned in my last update, the month of June in general will find me shifting my focus away from Vivian’s Last Cigarette for the next few weeks. Instead, I’m working on and finishing the RPG sessions I’ll be running for PortCon, which takes place from June 22nd to the 25th.

It is creative work, not unlike assembling ideas for a story outlines. But thereafter, crafting role-playing sessions and scenarios is different than settling down and writing fiction. Role-play is collaborative storytelling. Unlike a you-and-your-story situation, you need to leave a lot open in the scenario to allow the other people playing to craft the unfolding tale with you.

You’ve got to make your players active participants, because if they are instead passive observers the game isn’t going to be very fun. If folks want a passive entertainment experience, a good book, movie or something similar will whip the pants off of me standing around and acting out a story from start to finish for several hours.

Most RPG players are looking for that active experience. The key thing about RPG game mastering is to give it to them, but that can be harder than you think.

As a writer, I personally LOVE telling stories. I start thinking about characters and have a blast working out their backgrounds and personalities. Then I start envisioning story scenarios –Who’s going to do this and when, and how antagonist X will react and how events are impacted from there– This is a great strength for me to have as a writer, but as Game Master it’s a serious flaw: It makes it easy for me to have tons of preconceived assumptions and desires about how a game will play out, and how its players will act using the characters I have worked hard to craft and embellish for them.

As you can imagine, having a mindset like that doesn’t set-up an experience that is likely to be a satisfying role-playing for the players. With everything pre-plotted in my brain, they feel railroaded and like their choices and input doesn’t matter to the ultimate outcome of the game’s story. 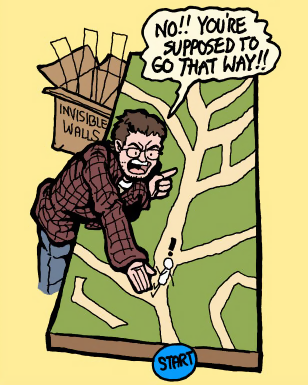 Three out of the four games I ran at last year’s PortCon featured characters I’d spent many tens of hours envisioning and writing. I wrote over 40,000 words of material for the con, most of that for player handouts with detailed character rundowns. However, that work was a wasted effort because it was vastly ignored.

The games were still fun all the same, because I designed them as open-ended and without preconceived conclusions. I did that as a safeguard, being conscious of my plotting tendencies, and I’m so glad that I did. Doing that salvaged those situations quite well combined with a positive mindset.

The one game where I let the players generate their own characters with a quick system turned out to be the best. All I did for my part was run the rest off a few pages of essential notes and lots of improvisation. I’d done it that way only because I was running low on time and couldn’t finish what I had planned initially… but it taught me a valuable lesson.

The downside is that this can eat-up valuable time when you only have four hours to play. Depending on the game, character creation can be lengthy and complicated. Fortunately, I’m using the Five by Five rules system for all my games this year. It’s a simple, versatile and understandable system that can be taught with 5 – 10 minutes. In it, characters only consist of five “traits” and one “trouble trait” that’s used as a roleplay aid. I have found 5×5 perfectly suited to the “pick-up” style of play found at PortCon, where players of all skill levels might be found at my table.

However, even simple and quick systems can get bogged down if the players don’t know what they want to play. In addition, players often don’t have a good grasp before the game starts of what character traits will be fun and useful in the scenario. This can result in characters that don’t get to do much, like a scuba expert in a desert based adventure. It can also create unbalanced parties with a massive excess of ability in one area (making some challenges too easy), and a great or total deficit in another (making other challenges nigh-impossible). 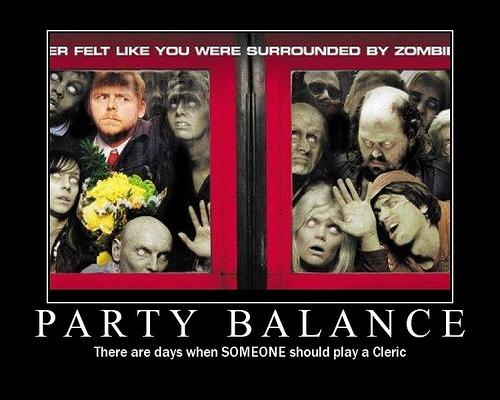 So this year what I’ve done in all my games is to let the players select their characters from a pool of partially completed ones: 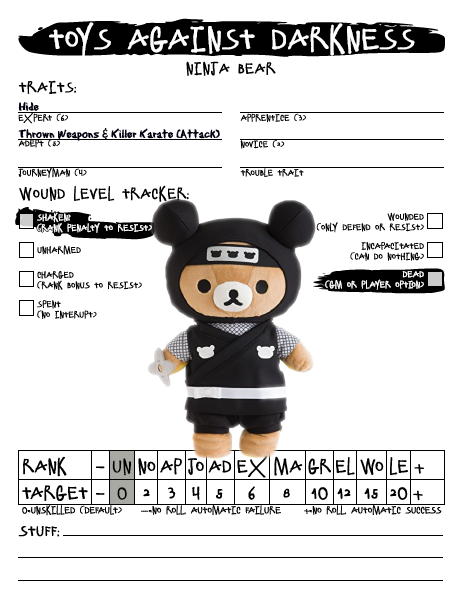 Each character has an illustration to give a player an at-a-glance impression of what they could be like. In addition, in most of the games I have 1 to 3 of the five character traits pre-selected as well. These pre-selected traits are useful to the scenario I’m going to run, thus ensuring that some basics needed for the game will be in the group of players. 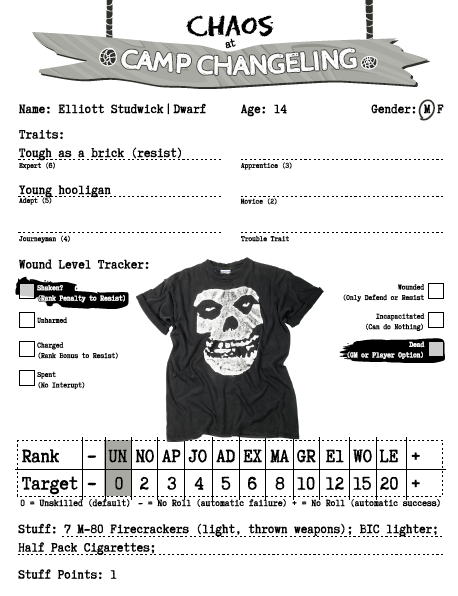 Unchosen trait slots get to be selected by the player as electives, off a chart of options that is unique to each game. This allows some player customization, enforces setting flavor, and ensures trait usefulness. Each individual trait is also removed from the available selection pool as they are chosen, ensuring each character has a unique set of abilities.

The one exception to this is my Godzilla: Invasion of Monsters game. In that scenario, ALL of the character’s traits are electives chosen by the players, allowing total customization… from a variety of useful traits. 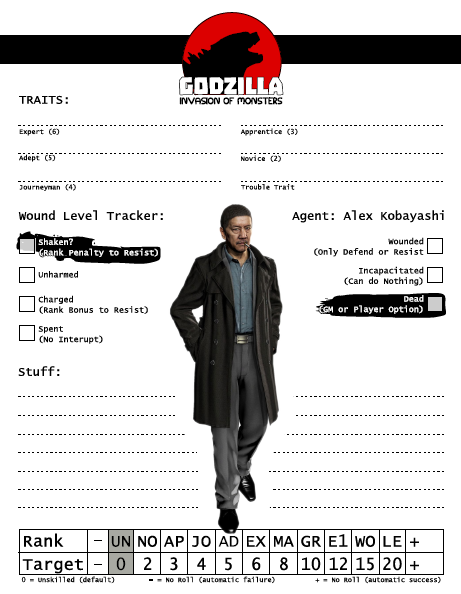 No specific background or roleplaying guidelines are presented for any characters in the games. I leave those for the players to dream up in play, and they get a head start on that by selecting a role-play related “trouble trait” from a list much as their other elective traits were chosen.

As a game master, my job is to keep the story moving, judge rules, describe events, and portray every character that isn’t controlled by a player. And I’ve found that as my players are given more freedom to tell and influence the story, I am freed as well. Instead of making the game “just so”, I instead can focus on my antagonists acting appropriately for their goals and knowledge. I improvise and let them react to the world the players are influencing. I can focus on making every member of my supporting cast of non-player characters being memorable, and simply having as much fun as the players are.

I’m a reformed, formerly bad, game master now. It just took me realizing that if I wanted to make a game “just so”… I needed to write it as a story instead. ;-)

Alright, time for me to stop blogging and get back to writing some more RPGs! Take care!