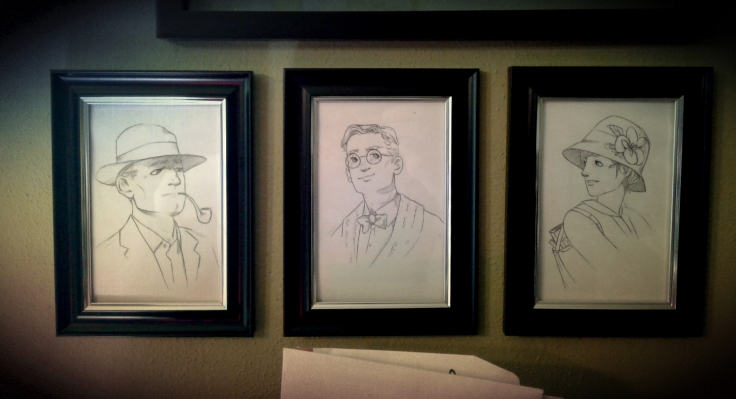 My vacation is over as of today, but I had a really good time at PortCon! My four RPG sessions all went great, with packed tables and super happy players afterwards that I made even happier when I surprised them with artwork souvenirs. The con after-party for staffers wrapped-up after 9 pm on Sunday and my wife and I got home totally wiped-out from the convention. My voice, as usual, got blown-out from having to orate at high volume for hours to be heard over the noise of the RPG room while also speaking in character as old fishermen, cultists, Nyarlathotep, squeaky-voiced-teen-stock-character-number-one, a grumpy marionette, and Tank-Tank’s sassy sister, Jet-Jet. But it isn’t shot as bad as in years previous thanks to the addition of some sound barriers at the con that the RPG team will seek to improve further for next year. And as I said to start, I had a great time! :-)

I set a new personal record for most players in a single game by running a session of nine players for my Hattie Hooch Lovecraft game on Saturday night. The game went very well, and 8 of the 9 players had a grand time despite (A) not solving the mystery and (B) barely surviving or not surviving. The one dissatisfied player had been a difficult and bossy person IRL/out-of-character in this and several other con games, and had not endeared himself to rest of the players. But then he went and did something quite stupid in-character when a cultist had the drop on him at point-blank range with a shotgun. Instead of keeping his hands up in surrender, he had his character try to pull his gun from an underarm holster and somehow out quick-draw a man with a finger on a trigger and twin barrels only a few feet away from his chest.

Yeah. That didn’t work out so well for poor Detective Renard… A shotgun slug to your ribs is a bad thing, kids. Avoid that.

But it was when the cultist stood over his stunned, twitching body… put a boot on his gaping wound, and blew the top of his head off that shit got real for the rest of the players. They saw that I had no qualms about killing-off their player characters and my darlings, and that this setting was deadly.

The difficult player tossed dice and stomped off, but I don’t reward stupid unless it’s a comedy game. The rest of the player group was silent as he left — but even without words I could tell they were glad to see him go — and then they all coalesced into a team out of desperation, realizing that by allowing his dumb actions to go unchecked the whole situation was now cascading out of control and the rest of the characters might now all die as well.

A few more did die, but not stupidly or for a lack of trying to save their lives. An entire village of cultists turned on them, and those that did escape only made it out by the skin of their teeth. After another player was murdered, it took one player’s self-sacrifice and another player’s deft — even heroic — use of a Rolls-Royce Phantom to run-down cultists and collect the others to GET THE HELL OUTTA HATTIE!

Those that made it barely survived. And there were far, far worse things in that village than cultists that had been alerted by the ruckus that would have ripped them apart (literally) if they’d tried to fight it out only a few minutes longer. The surviving agents escaped rattled, less a little sanity, and with hardly any more clues as to what “Hattie Hooch” was than when they started. So, from a mission perspective, the game was an abject failure. But from the perspective of playing a game that emulated a good, spooky and scary horror story that tested the player’s wits and role-playing to keep their characters alive when it hit the fan… it was an absolute WIN and they loved it! :-)

My second Lovecraft game, Whispers on Weldon Island, did not run as well or as large. It wasn’t a bad game by any measure: There was some decent role-play and it played out like classic Lovecraftian mystery and horror with the monstrous threat felt, but not seen until the very end. There was lots of investigation and clue finding, and I was impressed that there was no violence on the player characters’ part until the climax. Everybody had a good time. It was just that the players picked a group of characters (unintentionally) that had very little insight on the situation and very little, shall we say, “Chemistry” with one another. It made the game much less than it could have been in my eyes, and there was a TON of stuff that they missed out on. But like I said, everyone claimed they had a good time and was challenged… and in this game they actually did solve the mystery. ;-)

Oh well… my novel version based off the scenario will be much better. :-)

My Toys Against Darkness games bookended the convention on Thursday and Sunday and did exceptionally well. Everyone was all smiles and having wild fun straight through each. One player even made a short video that I found afterwards about their enjoyment of PortCon and cited my game as a highlight:

Now that’s a good feeling to get post-convention! :-D

(The con also used an image of me gamemastering in their local TV commercial this year (14 seconds in), which I didn’t even know about until after the con. That’s kinda cool too, and it is a great picture taken by a PortCon staffer.)

Lots of other stuff happened that was loads of fun, but this post is already running too long, so I’m just going to say that it was a hell of a good time. :-)

I do plan to return as staff and run games again next year at PortCon 2019, but I’m going to approach my planning differently. I do not want my gamemastering and game design for the convention to disrupt my writing like it has the past three years. No. Not ever again. I am not going to plot and flesh-out the character backgrounds for the games anywhere near as much as I have been, because all that work hardly gets touched.

Instead, I’m going to streamline the whole character process and mostly keep the actual here’s and what’s of the actual games completely in my head aside from a few key notes. I ran all my games this way this year with lots of improvisation, and they were some of the best games I’ve ever run. There’s simply no need for me to detail the player character options with the depth that I did for the Lovecraft games… It would have been a massively wasted effort and squandered time if not for the fact that I’m also plotting out these as stories I intend to write down the road with the same outlines and characters.

I’ve already got my three game ideas for next year. I’m going to whip-up the characters for them — just what I need to fill a character sheet and few paragraphs of background, because that’s all the players are going to see and/or use anyways for 4-6 hours of gaming — and have all that done months and months ahead of the start of the convention. Then I’ll give myself lots of room just to think about the scenarios. Knowing the scenarios prepared me for the games way better than writing down painstaking notes this year, and improvising on my feet and adapting to what the players are doing made for way better cooperative storytelling than following a rigid plan ever could.

I think that between those two major changes, I’ll save myself many weeks or months of work that I can then invest in writing fiction instead… and not getting stressed out over an event that should rightfully be all fun and good vibes for me. :-)

Have a great week everyone, and keep writing!

9 thoughts on “Vacations and Conventions, Fun and Learning, Storytelling and Role-Play”