I’m recovering from the convention, and it was an awesome four-day marathon! Everyone had a good time in the games I ran and created, and I didn’t have to cancel any of them for a lack of players. At one point on Sunday morning it looked like that might happen to The Most Dangerous Game of Doctor Moreau, but one con-goer in particular started calling in favors on his cell-phone to bring in people because he really wanted this one to happen! And it worked! He filled the table!

In attendance at the convention was one of only two people in the world who have ever finished the highly vaunted “Iron GM” competition with a perfect score. He was running his own games (a very popular table, he’s a fun guy), and after watching me in action several times he came over impressed and said that I “kicked major ass” game-mastering!

Accentuating that moment, there was a con-goer who came up to me after one of my sessions and shook my hand. He said that he had game-mastered RPGs since he was a kid, and what I did with the art form was now what he would aspire to achieve.

All that was very humbling. I came to the con feeling a little nervous that I wouldn’t be very good… I hadn’t really done a ton of game-mastering, ever. And even when I tried my hand at it as a teen and young adult, I think that most of my friends would agree that I was far from, uh, spectacular. Yet instead of just getting-by, I blew a lot of people away… including some very experienced, hard-core pros that always run a full table.

Now they want to team-up with me next year to rock the convention. :-)

All of this urged me to ask the question: “Why and how am I doing so well at this? I was pretty lousy before, and it’s not even like I had a game-mastering training montage before the con.”

After thinking about it, I decided that what’s changed is that I have accepted myself as a writer.

The last time I did any RPG game-mastering, and certainly when I was a teen or so, I was a frustrated writer and storyteller. I wanted to tell stories, but I let my fears keep me from trying, except for a few little bursts. I was afraid of rejection, ridicule and failure… and those are very human and universal things to fear.

Eventually I realized that I had to let go of those fears, or at least charge ahead and keep picking myself up whenever they knocked me down. I did this because I wanted my stories to live, because a story that is never told will never live beyond its creator. I love my stories too much to see them consigned to that fate, and with that resolution I found the strength I needed to try.

Before that point, role-playing games were a safe and private obsession of mine. A place where I could craft complete stories that I would tell “someday”. And when I ran a game, I did so having a very set idea on how I wanted the story to unfold. Those of you reading this who have ever played an RPG before are probably already cringing at this admission… and for good reason! ;-) Because the most important aspect of a role-playing game, the most important ingredient for a good time, is that everyone is involved in cooperatively telling a story.

If you take away the freedom of the players to participate and contribute in a meaningful way to the stories you build around the table, well… You’ve pretty much just railroaded your friends into preforming a screenplay for free. Worse yet, they’ll have just enough improvisational freedom and resentment to make sure the game master’s intricate story won’t unfold, in any way, as they want it to.

Yes, this is a recipe for a RPG session where NOBODY, players or game master, ends up very happy. And that was how a lot of my games went… They were just awful. So I gave up on GMing and focused on being a player in the very infrequent times that I did play after my twenty-fifth birthday.

Four years ago, I went to my first PortCon and participated mostly in the role-playing aspect of the convention. I had matured a lot, and learned how to be a really good player at the table. In an RPG that means not only using your wits and creativity to tell a good part in the story with your own character, but also helping your game master and fellow players tell their stories.

I found that I was really good at this: The same creative spark and sense of drama that I access as a writer were obviously also put to use in achieving that success. But the rest was just a mater of being a good team player and acting on the opportunities to draw out the best in your companions.

When I started writing seriously and with abandon less than a year later, I stopped being a frustrated writer and storyteller too afraid to try. Instead, I started the process of becoming and being a writer and storyteller. I haven’t looked back yet. In doing so, I could see what I had done with my “safe and private” RPG obsession and the creative dungeon I had made for myself with it. 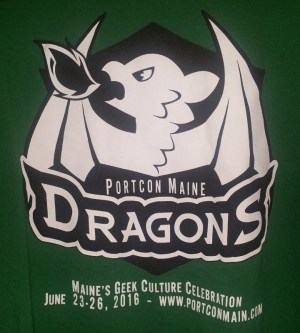 This month and weekend, I learned that if I have a good idea for a role-playing game, I can create one of those, too. And do it well. I utilize the same creativity and drama I have as a writer to craft their structure, and then I put my humor and performance skills to work weaving a story for and with everyone around my table.

It’s simply a mater of not setting my mind on a specific outcome. I provide the structure. I provide a vague flow of plot and action, and judge questions and disputes… But it is the players and their characters that provide the story, not I.

I’m creating stories all the time, pretty much every day I’m thinking them up. It’s my thing, my talent, my superpower… and I realize that not everyone is like that. So it’s a great feeling for me to be a conduit for those who want to be a part of a flowing and growing story with an unknown ending, but don’t have my talent to do it with.

The look in their eyes around my table, their excitement as dice are cast and fate is tempted. Their taste of my world. That’s my reward.

It’s been a busy couple of weeks, so check in tomorrow for part two my update… a WIP-IT Thursday!… Where I’ll finish my convention report and go over where I’m at with my writing this week!

Alright, time for me to stop blogging and get back to writing part two! Take care!