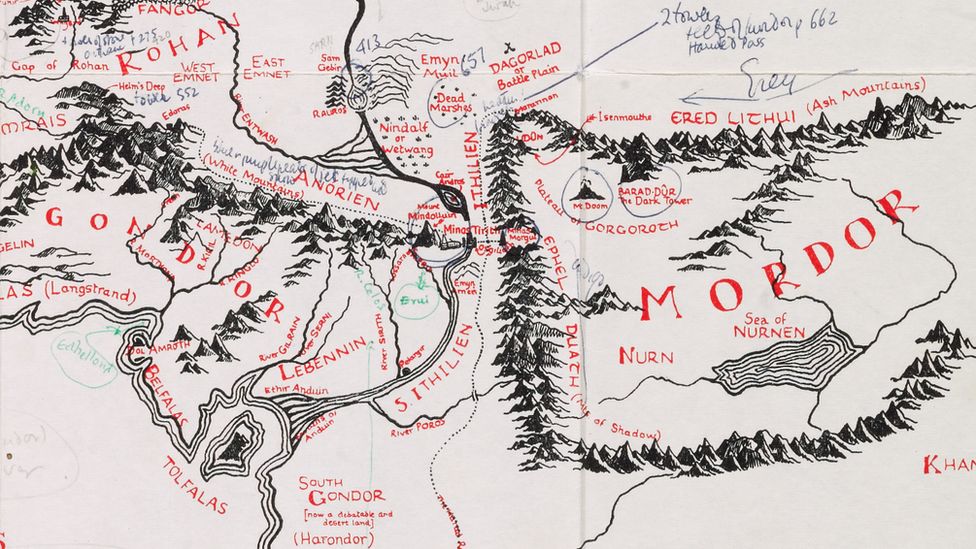 This March I revisited my worldbuilding lore for Burus, a fantasy setting I started writing stories about in 2014. It’s part of preparing my Burus stories for upcoming publication, and in doing so I discovered that my background material and notes are a mess. They started as an essay outlining the five major kingdoms of the continent. Now after seven years of writing and worldbuilding in the setting, some features in the outline are no longer canon. Some are initial ideas I didn’t like in practice and reworked, others I replaced with concepts I enjoyed more. Growth and evolution is good, but the core essay is now full of contradictory apocrypha and not an easy reference anymore thanks to supplemental notes I added from later writings.

There also existed gaps in my worldbuilding from the beginning I’d left to “fill in later”. They weren’t crucial things to starting the first stories. While I don’t regret that choice, now I’ve reached a point where kicking those cans further down the road needs to stop. My writing keeps having to pause as I fill the gaps. The task is momentum breaking as not only do I have to invent answers but also make sure my solutions don’t contradict any of the Burus stories I’ve already written.

So I decided to compile a new “World Bible”: A big revision and expansion to the original essay to integrate and organize my later notes. I’d expunge or revise the apocrypha, and fill-in the major worldbuilding voids — like the lack of a deep history and an unfinished geography — that keep hindering me. A core feature of this restructuring would be a map to organize everything around and keep it all straight.

A map would have multiple uses. Beyond a worldbuilding tool, my wife has long championed the idea of creating a setting map I can place in each Burus story I publish. I’ve got nine stories set in Burus, so I’d get plenty of mileage out of the cartography. With the base map as a template, I can also create smaller-scale maps focused for each tale. They will interconnect the stories and add value to each book.

Creating a map for the setting wasn’t my plan from the start. In truth, I’ve had some gruff history with fantasy maps. Part of my problem was they are so common in fantasy fiction that they felt trite to me: I didn’t want to make one to buck the trend and rolled my eyes at suggestions otherwise. My experiences stuck for over a decade in cyclical “worldbuilding dungeons” also factored into making me averse to the task. Those lonely days left scars. My fears about writing led to a heavy reliance on maps and research to plot every minute detail to craft “perfect” settings. I didn’t write a single goddamned word of fiction for a decade.

That said, my opinions changed in the intervening years and are different now than when I first envisioned Burus.

Yes, maps are nigh-ubiquitous for constructed fantasy world settings. When I was a staunch anti-mapper, I’d often wax dismissive and cynical: “Authors and publishers do it because Tolkien did it,” I’d say. “They think that if they slip a map into a hack rehash of Tolkien’s work it’ll make more money.” Today I still maintain that some authors and publishers go the map route only for those reasons. But all? Most? I don’t think so anymore. Over the years, I’ve come to see it’s not just because Tolkien made a map of Middle Earth for The Lord of the Rings and it became iconic because of the book’s popularity. Tolkien’s cartography became iconic because Christopher Tolkien’s map synergizes with his father’s words so beautifully, and the map aided his readers.

It’s not always simple imitation. Instead, I believe Tolkien provided a stunning example of how maps help readers navigate complex constructed world settings or regain their bearings should they become lost in them. Unlike stories set on Earth where contemporary or historical maps can guide us, imaginary worlds can get confusing when they range between locations. A map is a solid way to present points of reference and reinforce the world’s setting. The method isn’t even unique to fantasy anymore, with many examples of maps in science fiction.

Maps are powerful tools for an author as well. They are fundamental aids for determining how distant points A and B are in a traveling narrative, how long a journey might take to travel between them, and what lies along the way. Worldbuilding-wise, maps prompt ideas and highlight problems with an overview that text notes alone cannot provide. For example, a map immediately shows how close regions are and how they connect. From this vantage you can speculate about many things. About what the climate and geography might be. About the people that might live there. And if there’s people, there’ll be routes of trade and places of conflict too. All of these highlight pathways upon which you can build the stage for your storytelling.

The points made above kept being driven home as I worked on the Burus map. These are places I’d thought a lot about and written of, but never mapped. Yet far from just drawing the map from my notes, the more I drew the map, the more I wrote new worldbuilding ideas and corrected inconsistencies I uncovered visualizing the geography.

And here we come back to Tolkien again, much to my chagrin. For as I encountered successive challenges piecing together a map of a constructed world I’d written copious notes for and completed multiple fictions in, I discovered this quote from J. R. R. to novelist Naomi Mitchison in 1954:

“I wisely started with a map, and made the story fit (generally with meticulous care for distances). The other way about lands one in confusions and impossibilities, and in any case it is weary work to compose a map from a story — as I fear you have found.”

The full letter, a wonderful read, can be found in “The Letters of J.R.R. Tolkien” and also transcribed online.

Yes Professor, your words ring true to me as well, stuck neck-deep in a mapmaking-worldbuilding feedback loop. I too have found it weary work to compose a map from a story. Nine stories, actually. Plus notes… I mean, indexes and appendices. You’re fond of those, I know.

From doing things the hard way, I now see the wisdom in Tolkien’s choice to start with a map first and use that as a guide and template. How he poured his worldbuilding into the illustrations afterwards and built a foundation to plot on. But realizing my situation with Burus didn’t fill me with despair. Instead, I reminded myself how Tolkien was crafting his legendarium for over twenty years before he wrote The Hobbit and created a precursor to his map of Middle Earth. That thereafter a further decade would pass before he made his maps to plot The Lord of the Rings.

Tolkien in his letter to Mitchison is speaking from experience. The Hobbit wasn’t written as a part of his legendarium of stories that would later become the mythos and foundation of Middle Earth. He reused many elements from them in it, but only after the outstanding success of the book and when he began exploring ideas for a sequel did he strike on the idea of incorporating his prior works into a new whole. He struggled with the task for a long time: Thirteen years separate the publication ofThe Hobbit andThe Lord of the Rings. There’s plentiful evidence in Tolkien’s letters, drafts and papers of him encountering many frustrations trying to unify everything. In the end, he bridged the confusions and impossibilities between the world of his original mythos — later presented in edited form within The Silmarillion — and the world begun in The Hobbit, by placing the latter and the events of The Lord of the Rings in a third age after the first and second ages of his mythopoeia.

I side with the Professor and agree that this was a wise device on his part. The introduction of a third age gave him something better than a clean slate: He was now able to keep all the background of his mythic ages intact and align them to the world begun in The Hobbit. Like a crafty little hobbit, he’d found a way to have his pipe-weed and smoke it too. I suspect this is when Tolkien made his first maps for The Lord of the Rings, using The Hobbit maps as starting points. With the geography established, he poured his worldbuilding into it and forged a magnum opus.

That’s why realizing my situation with Burus doesn’t fill me with despair.

My seven years working off and on with Burus — writing stories with versatile fringes easy to modify and retrofit and with notes that kept the locations and backgrounds of those stories consistent — is nothing compared to the task Tolkien faced. It took him a decade, and he needed to coordinate thirty years of his ideas. My spending a few months to make a map and craft a world book while my life and writing are interrupted, anyway? Yes, I’ve got nothing to complain about. I’ll consider myself fortunate instead, even grateful. My Burus Mapping Project has been a fulfilling and creative one while navigating rough personal waters after my father’s death.

Next week, I’ll share what it was like starting my own map and some tips and resources that helped me. Until then, take care, be safe, and keep writing!